a conversation with the wood-carver gerhard trieb and tomas friedmann, director of the salzburg literaturhaus . may 1998

in the “woodcuts” minimalist dissonances 1, you worked with wood. in ”stonecuts” you cut a stone block from the untersberg – a mountain with a strong aura, which dominates salzburg´s surroundings and throws it´s shadow as far as the city in the winter – and installed it, the ”henndorfer block”, in a public space.

to move mountains has always been my desire, my dream. i have tried to artistically relate this wish, which is shared by many people. for me this is all about the symbolic realisation of the theme of foreignness. that is to say, to cut a particular stone from its familiar environment using a diamond edged wire and placing it in henndorf, not far from salzburg, and to effectively integrate the seemingly foreign body into these surroundings.

why did it have to be henndorf? could you imagine your work in another place?

henndorf is the area in which i have lived and worked. and: for me art is dealing with environment and any problems it may give rise to. therefore the question of another place was never considered.

was does space mean for you and your work?

space for me is not merely landscape. but primarily it is free space, freedom of thought and artistic expression. the ”henndorfer block” is a mirror to my soul, it also needs a lot of space. i can not envisage this sculpture being in an enclosed space. it would like imprisoning a human being. both the human and the sculpture need space in which to unfold.

a problem for me nowadays is that free spaces are vanishing, even though living space has stayed the same size or even expended due to increased opportunities.

maybe this impression is created by the increased efficiency whith spaces are used nowadays, due to the pressure for results, under which we place ourselves and we are bowed under. this also applies for the mind. i think that fantasy is increasingly being limited. we should resist this. this motivation led to the conception and realisation of my thought sculpture.

what do you mean by the thought sculpture?

thought sculpture is a metaphor. it is created on the emotional level, it is initially not mental work, but the realisation of intuition. that is the first impulse. the second is the formulation in the mind, in thoughts. and the third phase is realisation.

that sounds very planned. so you are not spontaneous?

on the contrary, i work in a very spontaneous fashion. i attempt to work as authentically, quickly and simply as possible. that is important for me. for a larger artistic project economic, technical and financial components play an important role. for ”stonecuts”, mountain experts and miners were drawn into the creative process. with the assistance of a 150-ton mobile crane the 25-ton block was installed in altentann near henndorf.

what do you want to bring about with your work?

with this artistic project and the irritation which the minimalist stone creates in the appropriate landscape, i want to trigger a thought process, which reduces and overcomes the distance which exists with regard to strangers and also artists.

so this is about provocation for you?

for me it is about confrontation. unpleasant conflict is important in order for the continued development of art and life. as an artist i try – like a child – to explore the limits, to pace out my horizon of thought and creativity and to enlarge it. maybe the strength of the symbolic expression of the ”henndorfer block” also lies in the fact that i was almost broken by the artistic insolubility of the problem. 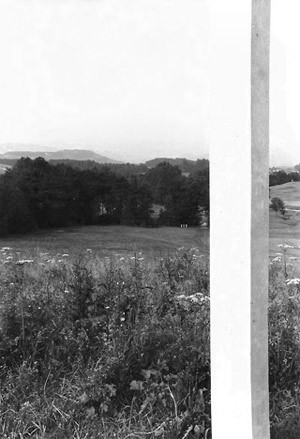